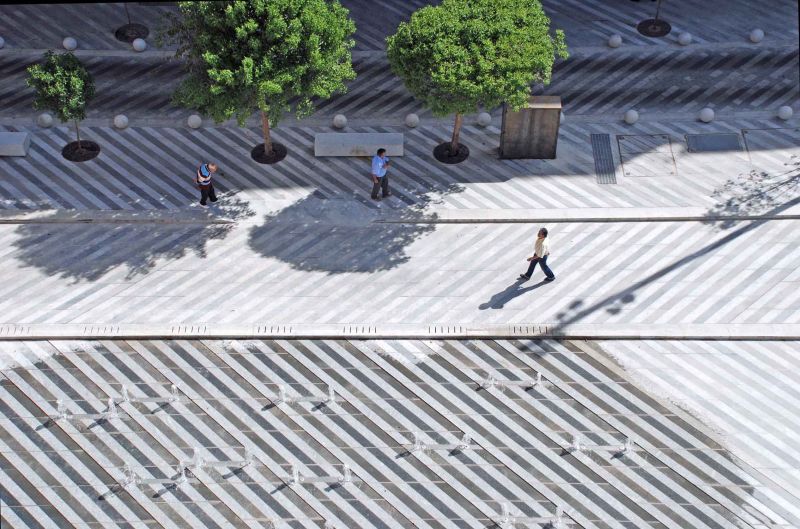 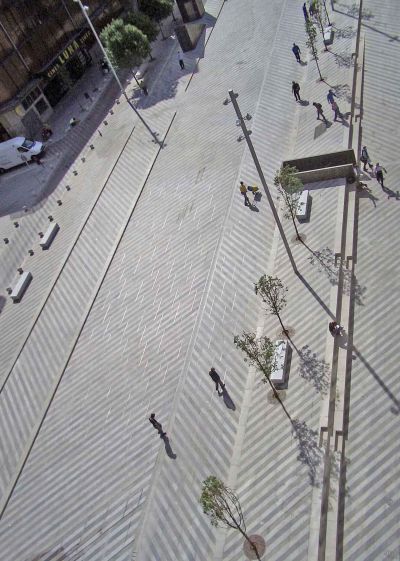 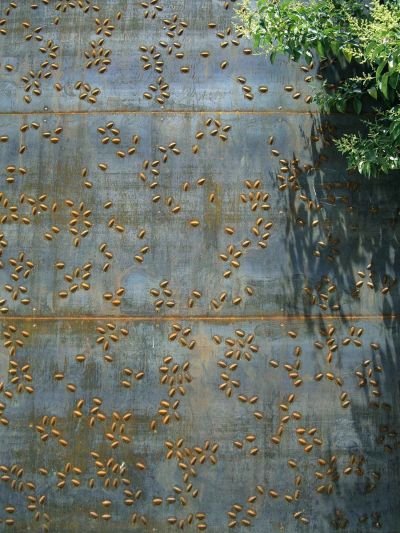 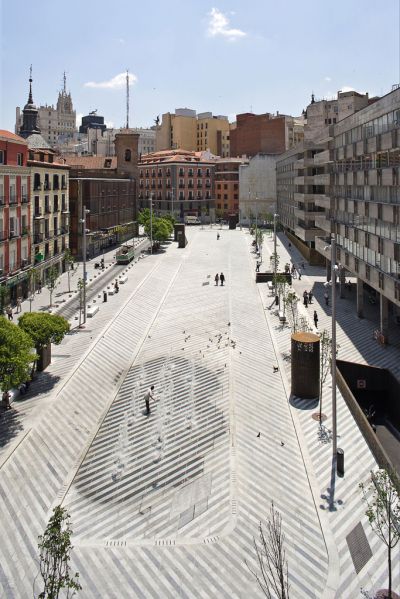 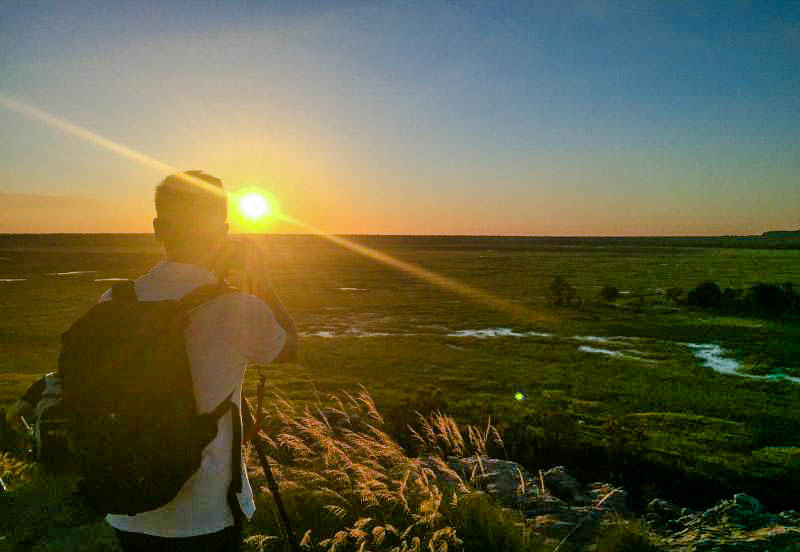 Plaza de la Luna (Plaza Santa Maria Soledad Torres Acosta) is a recently created square in the urban grid of the historical centre of Madrid, generated by the demolition of an old palace in the second half of the XX century giving place to an underground car-park and two new office buildings closing the blocks. In the last decades the neighbourhood, just behind the commercial Gran Vía, suffers from the general degradation of the housings and associated drug traffic and prostitution. The situation escalates in summer 2006, when neighbours grab on video the situation, publish it on internet gaining general attention of the press and in the following day a prostitute gets deadly hurt in a fight in brought daylight. The City Council decides to act and to reform the square as a part of the measures.

Architectonically Plaza de la Luna was characterized in previous years by its mixed and incohesive construction, most of which was in a general state of disrepair. The visual appearance of the square was dominated by its mixed levels and platforms which were uneven and anti-functional. Its previous topography was unclear, different platforms were connected with ramps and stairs. A street (C/ Tudescos), which crossed and divided Plaza de la Luna into two separate spaces, reinforced an image of the square with no unity. Different elements, such as walls, ramps, staircases, ventilation towers and vents of the underground car-park, acted as obstacles that hindered comfortable pedestrian use and with it, the general perception of the square.

A reorganization of the square, both architecturally and urbanistically was needed in order to encourage a more intense and mixed use that could match with the needs and interests of the neighbourhood.

The central idea of the project is a new topography. Despite of the difficulty because of the structure of the existing car-park with its ramps, staircases, elevators that all had to be maintained, we thought that the most important aim we had to achieve was to avoid the constant slope of the former topography towards the arcades of the southern office buildings that seemed to focus the whole space and perception precisely towards the worse part – the space beneath the arcades. Instead, we tried to create a topography that would be capable of unifying and organizing the whole space of the square redirecting the perception of the users towards a new centre. With this in mind, a large central space was created constituting a perfect setting for urban life; a multi functional, indeterminate and free area surrounded by low steps towards the edges. The steps accommodate and apply geometrical order to the trees and existing architectural elements such as ramps, stairs and ventilation towers.

The renovation of the square included doubling the amount of vegetation and greenery; large growth chestnut trees were planted in the perimeter zones to provide shade in summer and to create a natural vertical filter in front of the different facades, which never were thought to look at a square and generally are of low aesthetic quality, so the best was to hide them as far as possible. This greatly changed the overall appearance by enhancing the role of vegetation in the everyday experience and atmosphere of the square.

Ramps, stairs and ventilation towers were renewed entirely with one main material: naturally rusted, 3 mm corten steel, either punched or stamped with a floral motif that we had developed for a former project (the kiosk m.poli). This warm coloured material offers best anti vandalism qualities as it is very hard to write on, glued papers drop off and sprayed on graffiti can be easily removed. The punched motif has a double function: transforming the perception of a cheap and rusted material and anti vandalism.

The urban furniture was designed and located taking into account the new topographical conditions, architectural elements and trees spread around the square, leaving free the centre. In the lowest point of the square a water fountain that doubles as a game for children provides a refreshing counter point in the hot summer and at the other end in the highest point of the square, a child’s play area was placed close to an area where seniors can exercise in the shade.

The lighting of the square, especially that of the arcade under the surrounding buildings, used to be very scarce. As a counterpoint to this, a new false ceiling covered with white gresite was installed acting as a reflective screen for projectors. This provided a higher level of illumination under the arcades making them safer at night and more adequate for all kinds of activities.

The paving focuses on the texture and is made out of granite of different highly contrasted colours (white, green, black and grey). It allows for a clear lecture of the topography of the square and points out the special character of the square in the urban grid comparative to the living room in a house. According to this image the floor texture can be understood like the big carpet inviting you to play on. The main pattern has alternating diagonal directions common to each ring of the overall design. The colours are used according to their position: dark green is more present near the centre whilst towards the perimeter it slowly disperses giving place to other tones that integrate more with the surrounding streets.

Both the topographical organization and paving schemes were intended to encourage higher pedestrian use of the area. The removal of the street that used to cross the square (C/ Tudescos) is a clear example of this, as is the paving of the streets that surround the square. Public space focused towards pedestrian use rather than traffic.

The topography accommodates for different activities with imprecise boundaries that can vary according to everyday needs. We believe that the best squares are those that are basically empty and indeterminate. The centre of Madrid was lacking of a space with multi functional nature that allows different uses depending on the hour and station. The free centre provides a more dynamic space encouraging sports and busier activities, while towards the edge and beneath the trees more contemplative and static activities take place. The spatial organization does not determine activities in fixed places but intends to allow diverse forms of temporary activities, like street markets, musical actions or playing sports such as bicycle riding, skateboarding or ball games.

A male Aries, loves learning new things and being nostalgic to old things. Academic background: Bachelor of Construction Engineering Department at National YunTech University, Taiwan and Diploma of Graduate School of Business and Economics at University of Melbourne. With character of a little introvert, addicting to architecture, photography, tennis, Jazz music and saxophone and being the translator of Xin Architecture/ International, reporter, holder of activities and international tour leader.